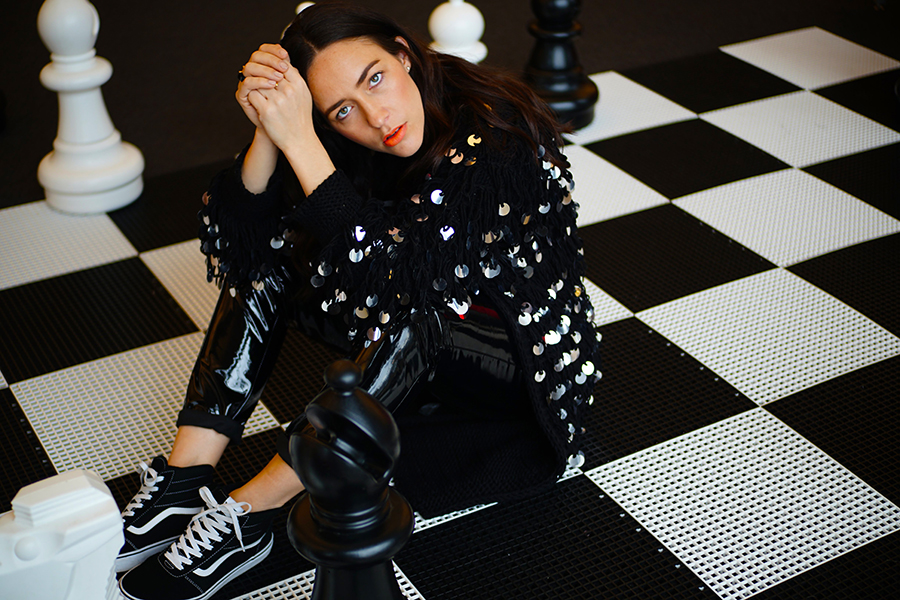 Over the last year I’ve been trying to do my part on bridging the gap between straight sizes and plus sizes. My number one goal has been to create a platform that shows and highlights the rest of us that aren’t being seen. You’ve heard me talk about being in this uncategorized and somewhat unfamiliar place, called an inbetweener. Unfamiliar in the sense that we don’t see models sizes 8-12 on the pages of magazines, in commercials or even the face of campaigns representing brands. I only have ever seen sizes models 0-6 and 14+ being represented and it’s become beyond frustrating that women like me (because there are LOTS OF US) are not being given a space, a chance, an opportunity.

I have to constantly defend myself. I’m constantly made to feel like I don’t fit in, anywhere. I constantly have to tell people my measurements, “44 inch hips is actually a size 12.” People laugh at me when I say “plus size model” because they don’t think I’m plus size. Then the plus size people scoff at me, and even get offended because they don’t think I’m big enough to be a part of their “group.” Feels mean girl-ish…and you know I’m not into that…AT ALL.

Can you imagine what it must feel like to be teetering on the line between the two? It’s almost like not being chosen during kickball at recess, or being excluded from a group of girls, that you so desperately want to be accepted by, in elementary school. It happened to me then and it’s still happening now (uh, that’s almost 25 years later). Pathetic. I’m just so sick and tired of people telling me that I’m not good enough to be “labeled” as one of them. (Having labels is a whole other story…)

There’s a group of undisclosed women that talk so much **** about me (publicly I might add). They are downright angry that I work as a plus size model. They spend their day and precious time (that doesn’t seem so precious) explaining their rage and dismay for me. I’m shamed for it. But isn’t this whole body inclusivity thing supposed to be just, that? Accepting of all sizes? Plus size women have fought tooth and nail to be accepted, and thank God they finally are. Why are some of them shaming those smaller and putting others down? Beyond the ridiculousness of this already, I just can’t believe people actually spend their time worrying about others so much. It’s straight up, looney-town.

I’ve been a signed model for just over two months now, and let me tell you, the work isn’t piling in. I was prepared for this. If I landed any gigs, it would just be a bonus. Being in between straight sizes and plus sizes, I knew it would be a challenge. I’ve been trying to find my place where they want a woman body who looks like mine. I just wish I could just stop comparing myself to others in terms of getting work. Often, I look at smaller and bigger women and admire how much work they are getting. I often think, if I just gain weight, I’ll get more work. Pretty sure I’ve never lost weight in my entire life, therefore, that’s not really an option. I love the way I am and I love the way I look. I should get work and be accepted, just as I am. Why isn’t that a thing?! Consequently, there are so many women out there that are dying to see someone that looks like them.

I definitely don’t see people who look like me, that are my size and shape that are represented. There’s a huge gap between two categories of women who are not being represented. I hope there is a bigger rise of the ‘in-betweeners.’ It would be a step toward bridging the gap between the extremes that the fashion industry most often represents. There should be a range of sizes and shapes represented across the entire industry. We need to stop labeling people as not enough! There should be no such thing as not small enough or not big enough.

To the people claiming to be “body positive” or “size inclusive,” as a gentle reminder, that means of all shapes and sizes!

With this blog, my goal has been to bridge the gap between model sizes one article and one photo shoot at a time! Let’s pray and hope to see more body shapes and sizes in the years to come. Who with me?!